Font des Prat
A relatively shallow spring with a high vaulted roof. Cool crystal-clear water gushes from Font des Prat all year round, supplying the neighbouring town of Mancor and also Massanella estate, for which it was originally conceived when the open water channel known as Sa Canaleta was built. Made in 1748, Font des Prat is more commonly known as Fuente de Massanella, as inscribed on the archway leading to it.

Fon de S’Avenc
This spring, which is located on the southern slope of Puig de Massanella, comes flowing out of a deep chasm, created as a result of water erosion. Its waters run into three basins situated at different heights, one excavated in the rock to make it easier to collect.

One interesting feature is the stone bench and table on the stairway leading to the spring.

Font d’en Ribes
This spring can be found on the right-hand side of the path leading to Ses Rotes. It is made of dry stone, with a very long shaft (8 to 9 metres).

Three steps lead into Font d´en Ribes, where its round basin can be seen.

Font de la Teula de Comafreda
This spring can be found by the first bend of the Comafreda stream, going in the direction of the ice stores. Its waters flow onto clay tiles and into a rectangular basin. A spring that gushes almost all year round, it is also known as Sa Font dels Nevaters.

Sa Font Nova
Hidden under the rocks in Massanella wood, a crevice leads to the source of the spring. It flows almost all year round, gushing out onto clay tiles. 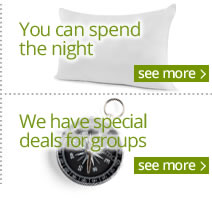